Hello to anyone reading this! I usually don't talk much about myself, especially online, but I think it might be interesting for other new and upcoming indie authors to see the inner workings of an author in the beginning of her career as such.

A little background: I'm an indie author who published her first book last July. I've been writing my entire life, since I was a little girl. I've written poems, short stories, and novel-length stories for as long as I was able to form sentences. I have manuscripts of other novels sitting around my house--there's one that's been under my coffee table through two separate moves--but Braving the Storm was the first story I wrote that I felt was good enough to actually publish.

Submitting the book was TERRIFYING, probably the scariest thing I've ever done. Waiting for the sales numbers to come seemed to take forever; Amazon, B&N, and most other online retailers take a full 90-120 days until my distributor, Bookbaby, gets sales figures. That's a long time to sit and wait to see how I'm doing out there.

On top of waiting for sales, there were reviews to wait on, which I'm learning a year in is a struggle to get from both famous and small-time authors alike. And we all know people on the internet can be very mean. At first, the cruel commentary was a bit rough for me. I'm more than a little neurotic, so I was ready to throw in the towel.

Thankfully, some good comments came in--and from complete strangers, not just friends and family. Of course friends and family tell you that your work is great, that it's perfect just the way it is. You expect that from them, of course, because they know how hard you've worked and how much of your soul has gone into this work. But when strangers tell you it's good...there's no reason for them to do so, so it's easier to believe them.

The best thing that ever happened was when someone in Ontario, Canada sent me a message on Facebook: 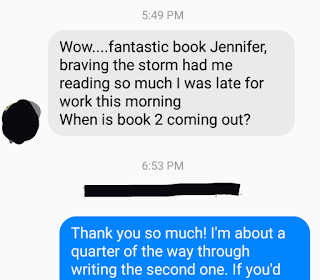 The fact that I made someone late for work in a completely different country absolutely blew my mind. Then I got a few other good reviews from others in Canada as well: 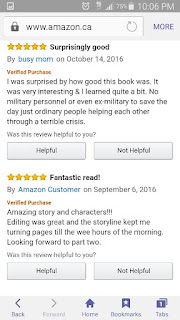 Once the sales finally came in, I actually sold way more than expected, so I was really excited. I didn't expect to sell more than 100 copies, period, over the lifetime of the book, but the first month I told 640 copies! While that may not seem like much, to me it was a huge deal! The number's gotten bigger since then, which is exciting, but I still have a long way to go.

I published my second book, Facing the Storm, in late April. I still haven't gotten my sale figures back, but this time I'm better prepared. I will weather the bad reviews and lack of reviews, and I will push on. I will keep researching and keep writing because it's what I love to do. Hopefully you'll adventure along with me. If you're worried about self-publishing, just know you're not the only one unsure of what to do!

Talk to you again soon!